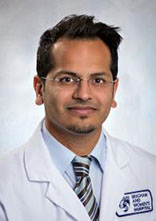 Steve Kelvin Singh, M.D., M.Sc., F.R.C.S.C, is currently the Surgical Director for Heart Transplantation and Mechanical Circulatory Support, at the Heart and Vascular Center at the Brigham and Women’s Hospital. He is a faculty member in the Division of Cardiac Surgery, as well as part of the Lung Transplantation and ECMO program, in the Division of Thoracic Surgery at the Brigham. Dr. Singh joins the BWH community from Baylor College of Medicine, Houston, where he served as Assistant Professor of Surgery, Surgical Director of Lung and Heart-Lung Transplantation, and the Interim Chief of the Division of Cardiothoracic Transplantation and Assist Devices. Dr. Singh completed his undergraduate, medical school training (MD, 2003) and cardiac surgery residency training (2010) at the University of Toronto. During that time he also completed a Master of Science in Clinical Epidemiology (MSc, 2007). His chief resident year was spent at Stanford University in the Department of Cardiothoracic Surgery, after which he continued as their clinical fellow in Cardiothoracic Transplantation and Mechanical Circulatory Support (2011). Dr. Singh began his professional career as an assistant professor of surgery in the Division of Cardiac Surgery at McMaster University, Canada, where he was also residency program director (2011-2013). Dr. Singh is board certified by the Royal College of Physicians and Surgeons of Canada (FRCSC, 2010) and UNOS Certified in Heart and Lung Transplantation. His clinical and academic interests are end-stage heart failure, mechanical circulatory support (VAD, ECMO), lung-transplantation, and adult cardiac surgery: including coronary surgery (on and off pump beating heart surgery), valvular repair and replacement, ascending aorta surgery, surgery for arrhythmias and re-operations. He has written over 45 peer-reviewed publications and book chapters, and presented at numerous national and international meetings. He holds multiple peer-reviewed grants as a principal investigator.

Dr. Singh has written over 50 peer-reviewed publications and book chapters, and presented at numerous national and international meetings, as well as serving on journal editorial boards.